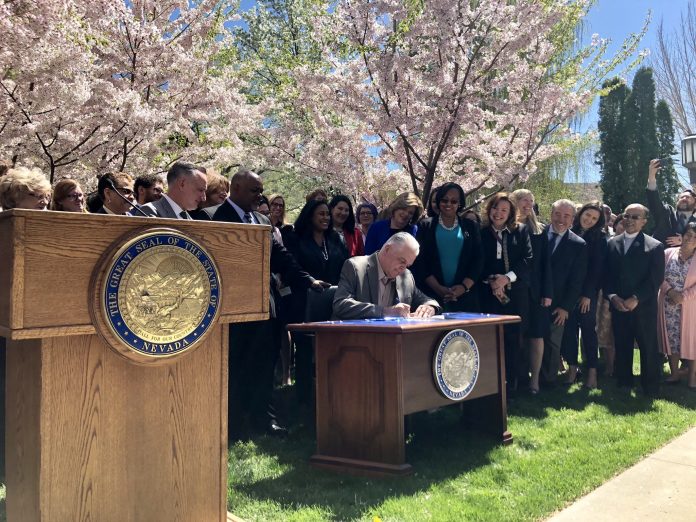 Governor Steve Sisolak today put his signature on SB358, which enshrines into law a path for Nevada to reach 50 percent renewable energy by 2030.

The bill, heard in committee earlier this month, was rushed through the Assembly chambers last week so that the governor could sign it on Earth Day.

The newly signed law was the result of a negotiation process between lead sponsor, Senator Chris Brooks, and stakeholders including NV Energy, large corporations who have left the grid, and rural electric coops. Ultimately, much of the energy savings won’t kick in till 2025. But, Brooks, says, “We got everything we were trying to achieve. Nevada will have 50 percent renewable energy for all energy providers in the state by 2030.”

RPS
The Renewable Portfolio Standard (RPS) is tied directly to Question 6 – which voters approved last November. It would require that utility companies generate 50 percent of their electricity from renewable sources. That would include solar, geothermal,  biomass, wind and hydroelectric under 30 megawatts.

That 30 megawatt hydro thing is important. It effectively eliminates Hoover Dam from qualifying as a renewable energy source. We’ll explore that in a bit.

Voters approved Questions 6 by 60 percent. But under Nevada law, a ballot measure that would change the Constitution must be approved twice. So it is scheduled to be on the ballot again in 2020.

But Brooks and other lawmakers realized that the voters’ overwhelming approval of RPS put the wind at their backs to push for the same standards in law, which would go into effect before any ballot measure could.

That seemed to move the opposition to the bill to sit and negotiate.

Judy Stokey, vice-president of government and community strategy for the utility, which generates and sells 90 percent of the power in Nevada, told the Senate Committee on Growth and Infrastructure earlier this month, “I think we ended up with a good compromise bill.

The law was also supported by the International Brotherhood of Electrical Workers 1245, which represents NV Energy’s workers.

“NV Energy, I will say, has been a really good partner in getting the renew standard bill together and in support of the bill,” said Andy Maggi, executive director of the Nevada Conservation League.

Rural Electric Coops
Then there were the local rural electric cooperatives. These cooperatives go back to way early in the last century, when farmers got together to bring electric power to their farms. Rural Nevada coops get more than 75 percent of their energy from hydro. That wasn’t initially counted as renewable energy for the purposes of Brooks’ bill, because their loads were greater than 30 megawatts.

Hank James, the executive director of the Nevada Rural Electric Association, pointed out that their clients don’t generate power, they simply distribute it to rural towns and farms. They mostly get their power from Bonneville Power Administration, which is a federal agency tied to the Bonneville Dam in Oregon.

James didn’t want his clients, whom he considers energy customers, not energy generators, to suddenly have to look for solar or wind energy when water power is already a non-carbon source.

“As far as the standard goes, we’re effectively in compliance with it,” James told me in a phone call a few days after the hearing.

Brooks ultimately agreed, allowing the hydroelectric that rural utilities distribute to be counted as renewable, as long as the load of each coop didn’t exceed 1 million megawatts in one year. James said most of his clients are hovering in the 50 megawatt range per year, though one – a mining company – might hit the 1 million threshold in a few years. If they do, they have to look for solar, wind or geothermal sources to supplement their supply.

And that Hoover Dam exemption? Most of the power generated from Hoover Dam goes to California. Only 25 percent stays in Nevada, while 18 percent goes to Arizona. The dam generates 4 million megawatt hours per year. And counting hydro as renewable is a bit controversial. Environmentalists point out that dams negatively impact fisheries and waterflows that lead to flooding. So most states don’t count them as renewable.

704B
704B refers to a law that allows some big energy customers to leave the purview of NV Energy to buy their own power from the marketplace. These customers have to pay a pretty hefty fee to NV Energy in order to leave their grid.

Switch paid a fee to NV Energy a few years ago so that it might generate or buy its own power. Barrick Gold left the utility about a decade and a half ago. Earlier this year, the City of Las Vegas was considering leaving NV Energy for a third party provider. They’ve since decided not to.

The thing about these 704B companies is that they only had to comply with the RPS standard that was in place when they left the grid. So Barrick, which left as soon as old the law was written in the early 2000s, only has to have 6 percent of its energy be renewable. Switch and MGM, which left after 2015, are currently in a 20 percent renewable standard. But that will change.

Moreover, 704B customers were allowed to count “energy efficiency credits” as part of their renewables portfolio. So a hotel, for instance, that put in more energy efficient air conditioners was getting credit based on the energy saved vis a vis its old air conditioners. This was true for NV Energy, too.

Brooks’ bill eliminates that credit after 2024 for certain 704B customers. Till then, NV Energy can count 10 percent of the savings from energy efficiency toward their renewable portfolio allotment, and 704B customers can count 25 percent.

“While energy efficiency is very important,” Brooks told me, “it is not renewable energy.”

The 25 percent for large corporations, though, does not count new companies who have applied to leave NV Energy, but have yet to complete the process. They will not be allowed any energy efficiency credits.

Brooks said that energy efficiency is not being counted in other states, which makes it hard to trade energy in a regional marketplace.

“Having states throughout the west that have common goals in their energy mix will open up a lot more opportunities,” said Brooks.

After 2024, everybody – energy utilities and the large businesses who have bought their way out of NV Energy – will have to start moving into compliance to be at 50 percent renewable by 2030.

Brooks says there are hundreds of storage capacity projects “that will be online in the early ‘20s.” But before you have storage you have to know that you will have the energy to store. Brooks’ aim is that the new RPS standards will ensure that.

“The need is great. We just needed the policies put in place to make it happen.”