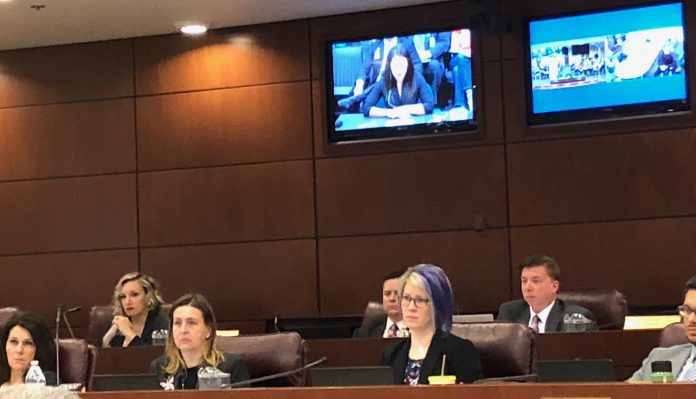 The Senate and Assembly judiciary committees came together Monday morning to hear testimony on AB291, the long awaited bill from Assemblywoman Sandra Jauregui (pronounced HOW-de-gee, with a hard g) that would ban “any semiautomatic firearm that has been modified in any way that materially increases the rate of fire… or approximates the action or rate of fire of a machine gun.”

The bill, often referred to as the Bump Stock Bill, would also give control of gun laws to local jurisdictions, and would make it illegal to possess a gun while legally intoxicated.

Many gun supporters – who made up much of the room in Carson City and Las Vegas, and all of the testifiers from Elko – expressed support for the alcohol provision, while vehemently opposing the other two provisions.

Jauregui gave an emotional presentation of the bill, reading a letter she had written to her family a week after the Route 91 Harvest Festival Shooting. Jauregui said she was standing on the grassy area near the stage when the shots rang out, that she panicked and froze and that her husband kept pulling her to run.

“Whenever the shots would start again, I would freeze, I couldn’t move… I was hysterical,” Jauregui read to somber – and some teary eyed – members of the committees.

Jauregui, who represents District 41 near the site of the shooting, said she feels guilt that she survived when others were hit, that her husband had to focus on her and couldn’t help save other people.

“I’m pretty sure that night has changed me forever. But no matter how hard it is to share my story, I will do it as many times as it takes to help prevent any person or family from having to share my experience,” Jauregui said.

Much of the questioning came from Republican legislators who are concerned that the bill is vague, and could unintentionally ban gun modifications that would not turn the firearm into an automatic weapon.

“As a female, with my firearm, sometimes a 10-pound trigger is not comfortable,” said District 32 Assemblywoman Alexis Hansen. “It’s too tight for me – so if I had my gun modified to a 5-pound trigger, would I be in violation of this law?”

Jauregui eventually said no, after a shout-out from the gallery that elicited a rebuke from Assembly Judiciary Chair Steve Yeager. Jauregui said that getting a lighter weight trigger “wouldn’t convert your gun into an automatic type firearm, so you would not be in violation of any legislation.”

She also said that she would be willing to work with lawmakers to change the language of the legislation so that common sense modifications would not be unintentionally illegal.

One solution was given by Chelsea Parsons, vice president of gun violence prevention at the Center for American Progress, who joined Jauregui to present the bill. Parsons first noted that AB291 “is drafted slightly more broadly than federal regulation.

“The purpose of that is to be able to anticipate future innovation by the gun industry” to “have the same effect as a bump stock device.”

But later Parsons noted that the new federal regulations on bump stocks, which the Trump Administration put in place in December, specifically defined outlawed devices as ones that allow “a semi-automatic firearm to shoot more than one shot from a single pull of the trigger by harnessing the recoil energy… so that the trigger resets and continues firing without any other physical manipulation of the trigger by the shooter.” This language is currently not in Jauregui’s bill.

Beyond banning automatic devices, AB291 would also allow local governments to enact their own gun laws, something that more than one person in opposition to the bill said would turn them into criminals just for going from one county to another.

Justin Jones, speaking on behalf of himself and not as a Clark County Commissioner, noted that issues that Las Vegas faces are different from Elko or Gardnerville. After the Route 91 shooting, Jones testified, “local governments looked to give assurances to the tourists so vital to our economy that Las Vegas and Clark County were doing everything in our power to keep our tourist corridor safe,” but were hamstrung by legislation enacted in 2015 that took gun legislation out of the hands of local governments.

That point was echoed by former Clark County Commissioner Chris Giunchigliani, who noted in her testimony that state gun regulations overriding local laws is a relatively recent phenomenon. “Make no mistake,” Giunchigliani said in her testimony, “this was an NRA strategy to remove local control, and now 42 states since around 2013 have lost their ability to have local control.”

Monday was the first hearing for AB291, and Assembly Judiciary Chairman Steve Yeager signaled that language in the bill surrounding definition of an automatic device would likely be tightened. “We are at the beginning of this process in the legislature,” said Yeager. “This bill is not going to be signed today.”