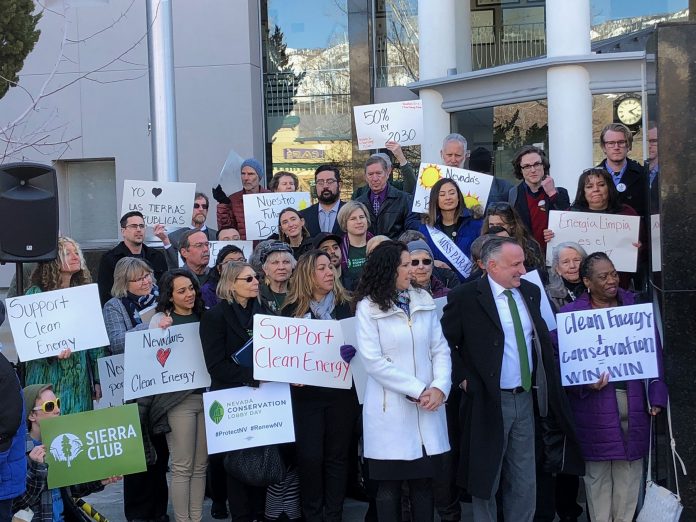 About 150 Nevada residents filled the halls
of the Nevada Legislature last week to lobby their representatives on issues related to climate change, renewable energy and outdoor recreation.

Most of the participants arrived in Carson
City after an overnight bus trip from Las Vegas. But a sizable number of people arrived from Reno and rural parts of the state.

Their message: pass bills that strengthen Nevada’s commitment to the environment and the outdoors.

Community Solar was passed by the legislature in 2017, but vetoed by Governor Sandoval at the end of session. There are actually two bills this session, both sponsored by Senator Mo Denis. One would establish community solar. The other would regulate how people can participate.

The conservation bond is a continuation of a ballot initiative that was passed on 2002. That $200 million project funded the establishment of Springs Preserve and the Las Vegas Wash, as well as the restoration of the Truckee River, among other projects.

The Office of Outdoor Recreation would oversee the various outdoor and conservation projects.

Maggi and Brooks also point out that pro-business aspects of good environmental policy.

“This very pro-business,” Brooks said, during a break from one of his many appearances before citizen lobby groups. “It creates economic opportunities for businesses here in the state around clean energy.”

Not everybody who attended the Conservation Lobby Day was talking about business. Jennifer Cantley, who lives in Carson City, brought her four children to the Legislature. Her message was about how climate change has affected her family’s health. Both she and one of her sons has asthma. Her daughter, Elizabeth Peck, talked about her best friend, who can barely go outdoors because of her climate related asthma.

“She has Type 1 diabetes and asthma,” said Elizabeth. “Her favorite thing is playing outside – swimming, hiking – and she can’t do that much anymore without getting allergy attacks and asthma attacks.”

Cantley, who works for the national environmental group, Mom’s Clean Air Force, linked the increase in environmental allergies and asthma directly to climate change. She says that when temperatures and climate go through wet/dry cycles, it “causes different plants and species around here to dry out an release their allergens again,” which used to happen only once or twice a year, but now is “all year round.”

That is born out by the American Academy of Allergy, Asthma, and Immunology.