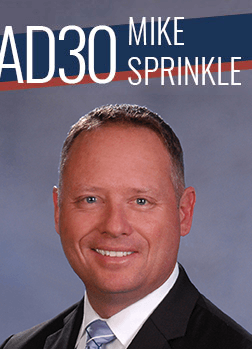 After two days of rumors and speculation, Assemblyman Mike Sprinkle announced he is leaving his Assembly seat immediately due to sexual harassment charges.

The charges come from at least three women who work in the legislative building. The complaints were made via a system put in place in 2017 after numerous complaints against Senator Mark Manendo led to an investigation and, ultimately, Manendo’s resignation.

Sprinkle’s resignation spares his accusers from having to go public.

In his statement, Sprinkle called his predicament “growing sexual harassment claims” and said he was “so sorry that anyone ever felt harassed or threatened by me. While that was never my intention, I am taking full responsibility for my actions and would never discredit the feelings or concerns of someone who felt wronged by me.”

“Sexual harassment is unacceptable and there is no place for it, in any circumstance, but especially from our elected officials,” said Senator Julia Ratti, in a statement put out by Senate Democrats. Ratti, who just took the job of Assistant Majority Leader, added, “Our Caucus commends the women who came forward to shed light on Assemblyman Sprinkle’s behavior.”

Assemblywoman Jill Tolles, a Washoe Republican who is a member of the Assembly Ethics Committee, told the Nevada Forward that her main concern was “that we respect the process that was put in place in 2017” and “protect the women who have come forward.”

Sprinkle, from District 30 in Sparks, was first elected in 2012. He is best known for his 2017 bill that would have allowed a public option buy-in for Medicaid. The bill was vetoed by then Governor Sandoval after the session ended in 2017. He was planning to bring the bill again this year.

Sprinkle is the second Democrat to resign from office this session. Last week, Senate Majority Leader Kelvin Atkinson resigned pending charges that he had diverted hundreds of thousands of campaign funds for his personal use.