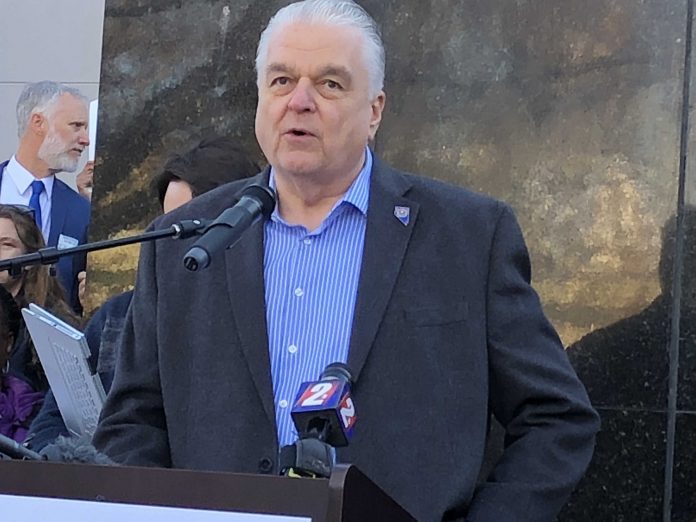 Governor Steve Sisolak told conservationists today that the state of Nevada has signed on to a state by state climate change compact.

Sisolak made the announcement at a press conference to kick off Conservation Lobby Day at the state legislature.

The U.S. Climate Alliance, led by California Governor Gavin Newsom, vows to implement policies agreed to in the Paris Climate Accord, which President Obama signed in 2017, and which President Trump pulled out of nearly two years later.

Nevada becomes the 22nd state to sign onto the Alliance, which holds states accountable not only to upholding the Paris standards, but participating in research about climate change in their states to share with the global community.

Democrats hold 23 governors’ seats, but the members of the Climate Alliance don’t fall along party lines. Three Republican governors are part of the Alliance – Larry Hogan of Maryland, Charlie Baker of Massachusetts, and Phil Scott of Vermont. Four Democratic governors have yet to join the Alliance – John Bel Edwards of Louisiana, Tom Wolf of Pennsylvania, Steve Bullock of Montana, and Laura Kelly of Kansas. Puerto Rico’s Ricardo Rosselló is also part of the Alliance. Puerto Rico has been hard hit by storms that have been made worse by climate change, including Hurricane Maria in 2017.

Assemblyman Chris Brooks told the conservationists today that a host of bills are in the works addressing renewable energy and other climate issues. He pointed out that Nevada brings in almost all of our coal energy is imported from out of Nevada, and that renewable energy and eco tourism are state economic drivers.