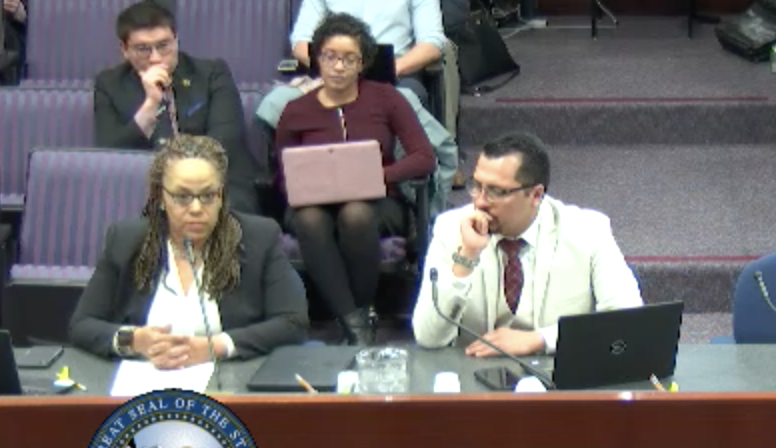 Her bill, AB132, was up for a hearing in front of the Assembly Commerce and Labor Committee. She had been out a few days before with the flu. And, she said, she was “completely surprised by the opposition to this bill.”

The bill in reference prohibits employers from disqualifying potential employees due to their use of recreational marijuana.

Potential employees – as Neal and her co-sponsor, Assemblyman Edgar Flores, pointed out a number of times in their testimony. The bill would prohibit vetting people during the hiring process based on their marijuana use. It would not address how people are tested or treated by their employers after they are hired.

But the bill also prohibits employers from using a personality test, like Myers-Briggs Type Indicator or the Caliper Profile, to hire employees.

And while some employer groups at least acknowledged that something needs to be done to guard against discrimination against people who are not impaired, but have marijuana in their systems, almost every employer group who testified against the bill had issues with the prohibition of character assessment tools.

Neal, who represents District 7, covering most of North Las Vegas, noted that she did not support the legalization of recreational marijuana in 2016. But since it passed, she said, the state has created a quagmire.

Neal said she was worried that without something spelling out how employers may approach potential employees who use recreational pot, “it seemed like it would create a class of individuals who were ineligible to be hired anywhere.

“It was a struggle for me, because I looked at people who smoked weed as people who didn’t want to do anything valuable with their life,” she told the committee. “But I have had to come to a reckoning that that is not necessarily the case.”

If Nevadans do smoke pot in their homes, Neal said, “I want to make sure people have a job to go to, and don’t end up on the street” because they were denied work based on their recreational marijuana use.

Neal and Flores listed to the committee not only what the bill will do, but what it doesn’t do.

“There are stakeholders who don’t drug test until after they hire. And if they’re drug testing after somebody’s been hired, AB132 doesn’t touch that,” Flores, who represents District 28 adjacent to Neal’s, told the committee.

Groups that oppose the bill as written were also offering amendments that they say would allow them support it.

Chief among them was an amendment by Paul Enos, CEO of the Nevada Trucking Association.

“I do appreciate the tension that this law has caused in terms of how we deal with marijuana in the workplace,” Enos testified. “Imagine what would happen if we told our truck drivers you can’t drink beer anymore and drive a truck.”

He noted that his industry has been working for a few years on abiding by laws that legalized marijuana while maintaining “a high standard for people who are driving trucks.”

For instance, truck drivers are in violation of industry standards when they have .02% alcohol in their systems. Legal impairment in most states is .04%.

The problem is, as Assemblyman Steve Yeager pointed out, there is no clear test for marijuana impairment.

Enos and a few other business groups said they would support the bill with the added sentence, “Except in the case of hiring for a safety sensitive position or as otherwise specifically provided by law…” and a subsection that would define what a safety position is.

That worried Assemblywoman Maggie Carlton, who felt that the safety provision could be construed so broadly it could effectively include every employee in the state.

“I think there would need to be a little more definition as far as safety sensitive position goes. I think that’s just a little too ambiguous,” Carlton said.

Safety is also at the heart of Enos’ argument against the section of the bill that prohibits personality testing for prospective employees.

“We’re trying to develop an assessment tool to look at personality factors that result in who a good driver would be,” Enos said, noting that they are aggressively trying to attract younger drivers to an industry with an aging workforce.

Enos listed the traits of impulsivity, aggressiveness and sensation seeking as character features the Trucking Association tries to weed out.

“The last thing we want is somebody behind an 80 thousand pound truck to be sensation seeking,” Enos said.

Neal said that the inclusion of the personality tests in her bill is the direct result of a constituent’s experience trying to get a job as a stock person at Walmart. The constituent, who was young and had never had a job before, was turned down after trying to guess the answers to a 50 question character assessment test.

“You can only ask me so many things about my personality without training me,” Neal said, noting that stocking shelves is not a safety-sensitive position.

The bill was not voted on. The parties were told to go back and work out the amendments, which they seemed willing to do.