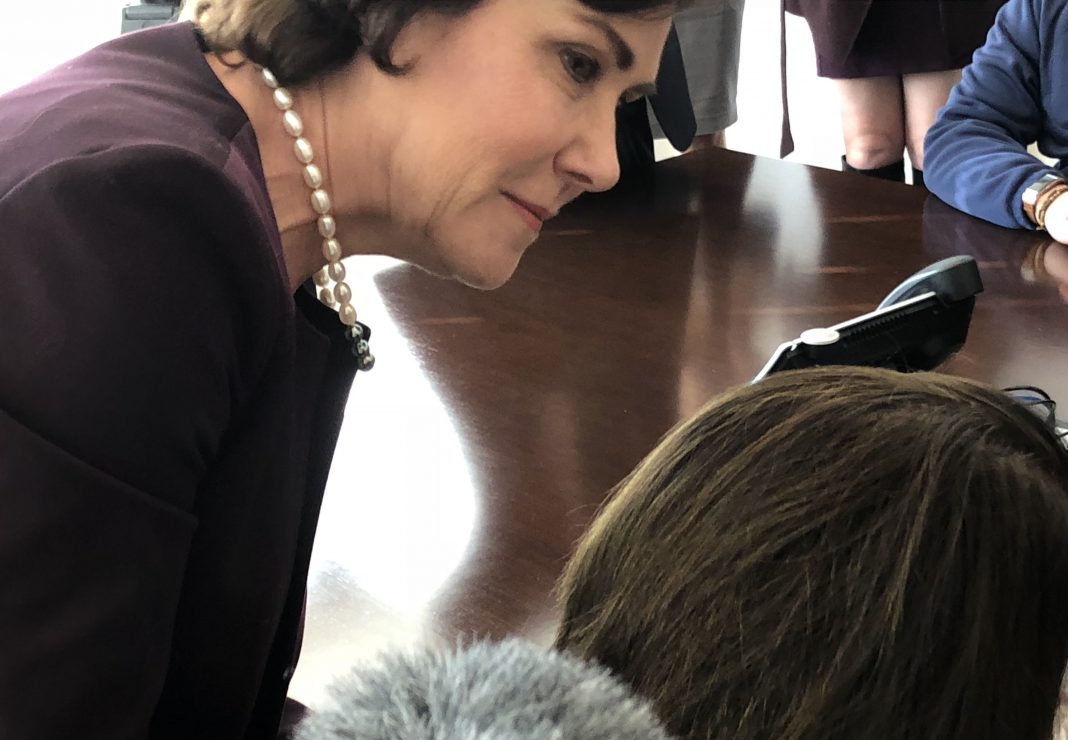 Ellen Jackson carries a picture of Tom Steyer wherever she goes.

She even went to his rally when he swung through Las Vegas last week.

The picture, though, was taken after another visit, when Steyer was leaving Las Vegas and making his way through the TSA line at McCarran International Airport.

Jackson is a TSA supervisor. She said she looked at the name on his ID and looked at his face, and insisted on getting a picture with him.

These days, Jackson is insistent that she needs to pay her bills. Since the government shutdown has started, she has doubled down on her second job as an Uber and Lyft driver, sometimes calling in sick to her main job as an airport screener – a job that, at this point, has stopped paying her. But insists that she show up anyway.

Transportation Safety Administration agents are among the “essential” government employees who have to work through the current government shutdown. They missed their first paycheck last week, and don’t know if and when they might see their next one.

To make matters worse, all employee leave was rescinded once the shutdown started. If you don’t come into work, you are considered AWOL, TSA agents said during a meeting with Senator Jacky Rosen.

Jackson, who is an Air Force veteran, said she is willing to face the consequences if she is punished for calling in sick to earn money driving.

“I’m a trapped rat. What more can I do. I’m not ruining my credit.”

Becky Esquivel is a transportation security officer, and the chief steward representing TSA workers at McCarron for local 1250 of the American Federation of Government Employees. The AFGE represents roughly 3,000 workers in Nevada and Arizona – including TSA agents.

Esquivel said that she and many of her colleagues have applied for SNAP benefits – which are also affected by the shutdown.

Esquivel also feels stuck by her inability to take leave for fear of being fired.

The day after the government shutdown began, Esquivel got a call that her sister, who lived in Hawaii, had died from complications of the flu. Ordinarily, in situations like that, TSA and other government workers would take bereavement leave. Esquivel couldn’t do that.

“We were threatened – threatened with disciplinary actions and AWOL if we didn’t come to work,” Esquivel told the group gathered at the Legal Aid Center in Las Vegas with Senator Rosen.

Morale is low. And that worries Esquivel.

“We need to be 100 percent focused at our job. A distraction could cause a major catastrophe. We don’t need that.”

TSA agents – those people we all love to interact with at the airport – make an average of $40,000 per year to keep our airlines safe and flying customers happy. That, says Renee Hearnton, another TSA agent at McCarron, is not enough to endure even one missed paycheck.

“We don’t have the luxury of having two and three months reserved for our living expenses. We just don’t have that luxury – we live check to check.”

Hearnton said that many of her colleagues are calling their mortgage bankers and utility companies and asking them to forgive late payments. While her bank said they will waive fees, any late payment will show up on Hearnton’s credit report.

Rennee Hearnton is afraid to take unemployment, because she will be in a deeper hole when she has to pay it back.

TSA agents are also applying for unemployment. But, Hearnton is adamant that she won’t do that. That’s because if furloughed federal workers are given back pay, they have to pay back any unemployment benefits they’ve collected to their respective states, according to Rosa Mendez, the spokesperson for the Department of Employment, Training and Rehabilitation.

In Nevada, unemployment pays a maximum of $450 a week for 26 weeks. What individuals get depends on their income and length of employment, Mendez stressed.

There’s also the question about whether people who are required to work but who aren’t getting paid – like TSA agents and air traffic controllers – can even be eligible for unemployment. Last week, the Department of Labor sent letters to many states asserting that federal guidelines state that “employees who remain on their jobs on a full-time basis are generally not eligible for unemployment benefits because states may determine that they are still fully employed.” Governors of a number of states, including Washington and New York, have asked for clarification of the rule. California Governor Gavin Newsome has decided that his state will offer unemployment even to workers who are still forced to be on the job.

Governor Steve Sisolak has not made a decision on the unemployment issue as of Jan. 22. A spokeswoman for the governor, Christina Amestoy, released a statement saying, “The administration is currently looking and takes this very seriously. The Governor is committed to finding a solution to helping the Nevadans affected by the shutdown.”

Even if Sisolak allows people to be paid unemployment, at $450 per week, TSA workers are only taking home a fraction of their salary – about 60 percent for people making $40,000.

That means that even with unemployment, people are still falling into a hole – that they have to pay back if Congress approves back pay whenever a new spending bill is approved. Hearnton is afraid that digging out of that hole will be too much.

Legislators Poised to Vote This Week on Background Check Bill

Sandoval’s Vetoed Bills Were Not Overridden by the 2019 Legislature. What Now?