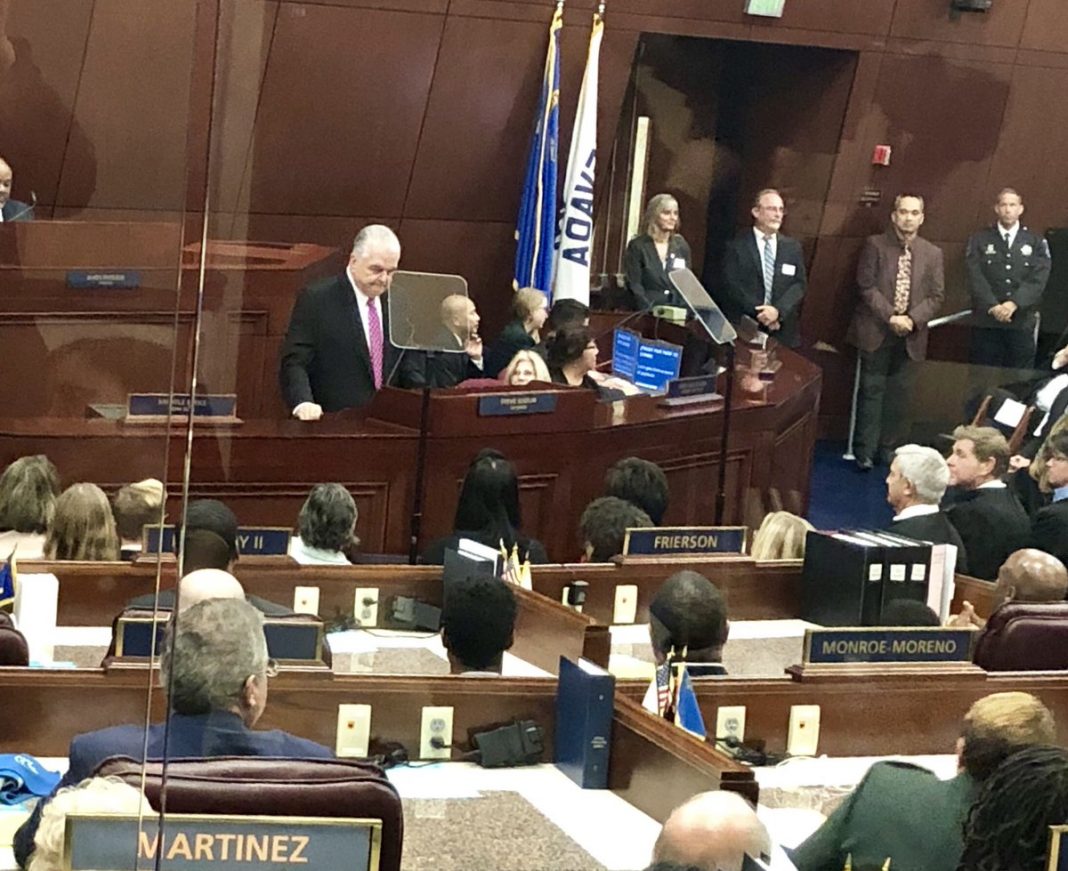 Governor Steve Sisolak says he has a budget surplus. And he intends to spend it.

And so, the State of the State turned into a laundry list of spending priorities – from health care to education to job training. The Governor’s legislative agenda included a 3 percent pay increase for state employees, the promise of new health care centers and about $258 million in categorical funding for public education.

And he said he would do this without raising taxes.

The governor also proposed that state workers “should be empowered to bargain collectively in the years ahead,” and called on state agencies to “let employees know what options they have.” The proposal bucks a trend in other states, like Missouri and Wisconsin, which have moved to restrict collective bargaining by state employees.

That promise was the most progressive proposal in a speech that hewed more toward the middle ground that Governor Brian Sandoval had etched out.

Much like Sandoval, who passed a commerce tax to fund education in 2015, Sisolak is also pledging more money for education, including making a dent in the $1.2 billion number that education policy experts say is needed to pay for struggling students, English language learners and students with disabilities – categories that are mandated by the federal government.

Sisolak also promised a change in the funding formula for education – an adjustment long sought by education advocates in Southern Nevada, who argue that it is unfair that Clark County tax dollars support education in the rest of the state – especially Reno.

The governor said that funding would follow the pupil, telling legislators specifically that “we have to make sure our statewide funding formula is equitable for every student in every county.”

Where that roughly $258 million Sisolak spelled out in his speech – and more when you count teacher pay raises – is coming from is not clear. A 2016 ballot measure legalizing marijuana stipulated that money raised from the sale of recreational pot would go to education. But at the end of the 2017 legislature, uncertainty about how much would be generated in marijuana taxes combined with last minute budget negotiations to lead legislators to temporarily park income in the state’s rainy day fund.

Legislators have been promising constituents that money would be transferred to the education budget once the new session started.

But Governor Sisolak gave no indication that any money was coming out of the rainy day fund. In fact, he proposed adding $45 million over the next two years. That would increase the rainy day fund to roughly $338 million by the end of 2020.

That might not be a bad idea, since economists told the Economic Forum of the Legislature last month that they are expecting a downturn in the state’s economy sometime in mid-2020.

Sisolak’s State of the State covered three basic categories that he says are priorities for Nevada: the economy, health care and education.

The governor, like Sandoval before him, is relying on increased jobs from increased tech investment. He cited Tesla, Google, Apple and Amazon – who have set up shop in Story County, just east of Reno. He also mentioned the Hyperloop and blockchain technology.

He promised streamlined regulations for small businesses and a $10 million tax credit for the creation of more affordable housing – though he didn’t say where.

The governor’s speech also lacked specifics on his call to raise the minimum wage. Currently, Nevada’s minimum wage is $7.25 per hour. Minimum wage advocates have been calling for a $15 an hour wage – which comes to about a $30,000 a year income. Governor Sandoval vetoed a bill in 2017 that would have raised the minimum wage to $12 an hour by 2022.

And while Sisolak said he would sign an executive order creating a Cannabis Compliance Board, he didn’t talk about creating a state bank for marijuana sales. The Assembly Committee on Growth and Infrastructure is proposing such a bank be considered in the upcoming legislative session.

For education, Sisolak promised more money towards technical schools and teachers. He promised teachers $80 more dollars per year (up from $100 currently) for school supply reimbursement. He also asked the legislature to include teachers in a 3 percent pay increase for state employees. Public school teachers are county employees.

Other education funding proposals would include those federal categoricals: $44.7 million to ensure access to quality preschool; $63.4 million in the Read by 3 program; and “approximately” $150 million for Zoom and Victory Schools, which serve English Language Learners and kids who are falling behind.

Some of his education spending proposals will be in buildings. He wants the state to help fund a Health and Sciences building at the College of Southern Nevada, and a new Education Building at Nevada State College. And, he promised to pay prevailing wage for all public building construction.

Sisolak is also proposing more money for safety in schools and for additional behavioral health workers. He asked that 10 percent of the marijuana tax go toward preventing violence in schools.

Of course, Sisolak, who was deeply involved in recovery efforts after the Route 91 Harvest Festival shooting, is also asking for gun violence prevention measures. Specifically, he asked the legislature for a bill to ban bump stocks – an add on that increases the rate of shots a shooter can get off. The Trump administration banned gun stock sales on a federal level in December.

And Sisolak called for implementing “common sense background checks” – which voters approved in 2016, but which then-Attorney General Adam Laxalt refused to implement. Current AG Aaron Ford has said he will implement background checks.

Sisolak also spoke to women’s issues around health care and jobs. He called for equal pay for equal work, and “to find a consensus on paid leave for Nevada’s workers.”

He also proposed tougher protections for victims of domestic violence – specifically that people who have restraining orders should not be allowed to buy a firearm.

Governor Sisolak spent a great deal of time talking about funding and supporting health care in the state.

He proposed an extra $3 million for women’s health care and an increase in Medicaid money to expand programs for neonatal and pediatric ICUs, autism, and substance abuse. He would like to increase access to mental health services, and expand the Community Behavioral Health Centers from three to 10 – though he didn’t say where those centers would be.

He is also asking for more money to help treat substance abuse and mental health issues among Nevada’s prison population, along with prison job training programs.

More health care proposals will likely come from a Patient Protection Commission, which Sisolak said he would create in the next few months.

The goal of the commission, he said, was to “evaluate what we’re doing well and, more importantly, what we can do better, including protecting Nevadans from being gouged by prescription drug prices.”

Such a commission will not likely have a report ready by the end of the legislative session in June.

Sisolak promised to do better by veterans in terms of health care, too – especially in rural areas. He is proposing the addition of veteran service officers to help vets “access the federal benefits they deserve,” which, he says, total some $114 million.

He’s proposing $800,000 in increased funding for Meals on Wheels, which brings food to homebound seniors and younger people with disabilities.

The governor also told the legislature that he will not tolerate any debate on the reality of climate change. He proposed that legislators take it upon themselves to raise Nevada’s clean energy goals to 50 percent by 2030, rather than waiting for a second ballot measure to pass in two years. (In Nevada, laws enacted by ballot measure must pass twice; the first 50 by ’30 measure passed in 2018.)

He called for the preservation of public lands in Nevada, and promised that “not one ounce of nuclear waste will ever reach Yucca mountain while I’m Governor.”

Sisolak also addressed immigration issues, an acknowledgment that roughly 20 percent of our population was born outside the U.S.

He is opening a Governor’s Office for New Americans, which will help people new to this country navigate the system, and support DACA recipients and applicants. He also committed to make sure every Nevadan is counted in the census. Census undercounting mostly affects immigrant communities.

Senator Heidi Gansert gave the Republican rebuttal to Sisolak’s speech. Gansert warned of the predicted economic slowdown in 2020 and urged her fellow legislators to limit new spending. She also urged the continuation of Opportunity Scholarships, which provide tax credits for a private investment fund to help pay for students to go to private school. Neither of these programs is likely to get much traction in a body where 42 out of 63 legislators are Democrats.