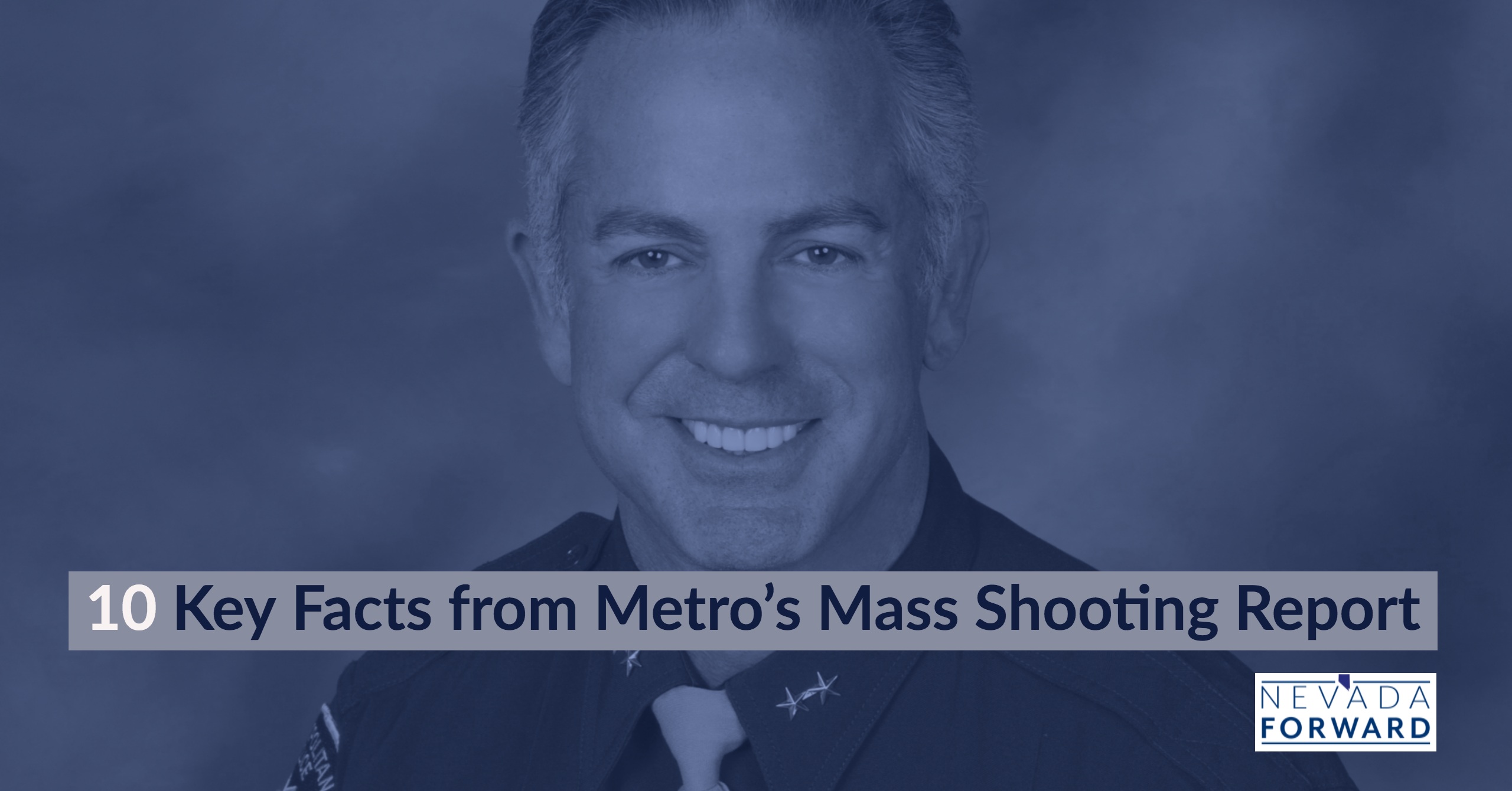 In response to online conspiracy theories regarding the nation’s largest mass shooting on October 1, 2017 at Mandalay Bay, Las Vegas Metro Police Department have released an unprecedented preliminary report containing details regarding the attack and the department’s investigation. Here are ten key facts you should know: 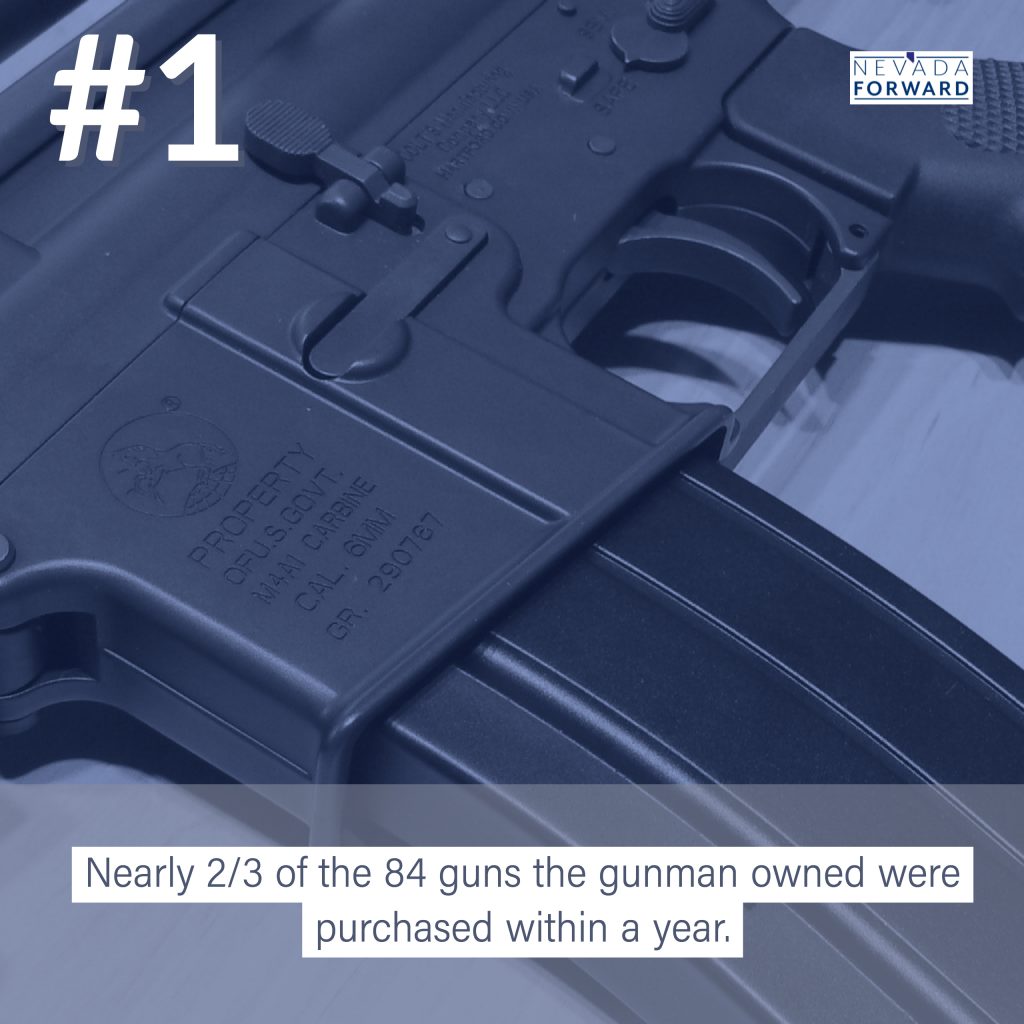 Nearly two-thirds of Paddock’s guns were bought within a year before the shooting, including ammo & accessories

“From 1982 through September of 2016, Paddock purchased 29 firearms. These purchases consisted of handguns, shotguns and one rifle. From October 2016 through September 2017, Paddock purchased over 55 firearms. Most of the firearms purchased from 2016 through 2017 were rifles in various calibers along with over 100 firearm related items through numerous retailers. The firearm related items included scopes, cases, bump stocks and ammunition.”
LVMPD report pg 4 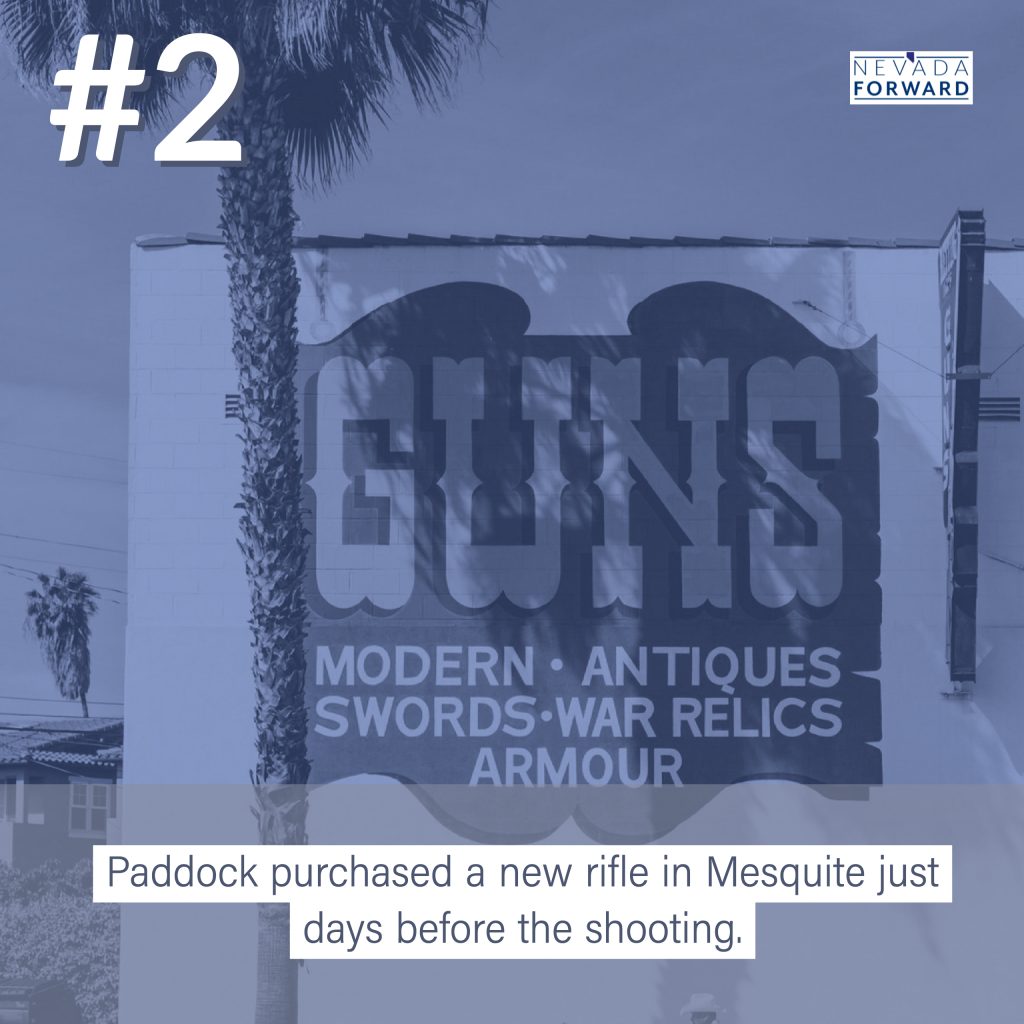 “September 28th – In Mesquite, Nevada, Paddock purchased a .308 bolt action rifle, deposited $14,000 into a Wells Fargo account, and wire transferred $50,000 to an account in the Philippines. Paddock visited a gun range in Mesquite, Nevada, before traveling back to the Mandalay Bay.”
LVMPD report pg 9 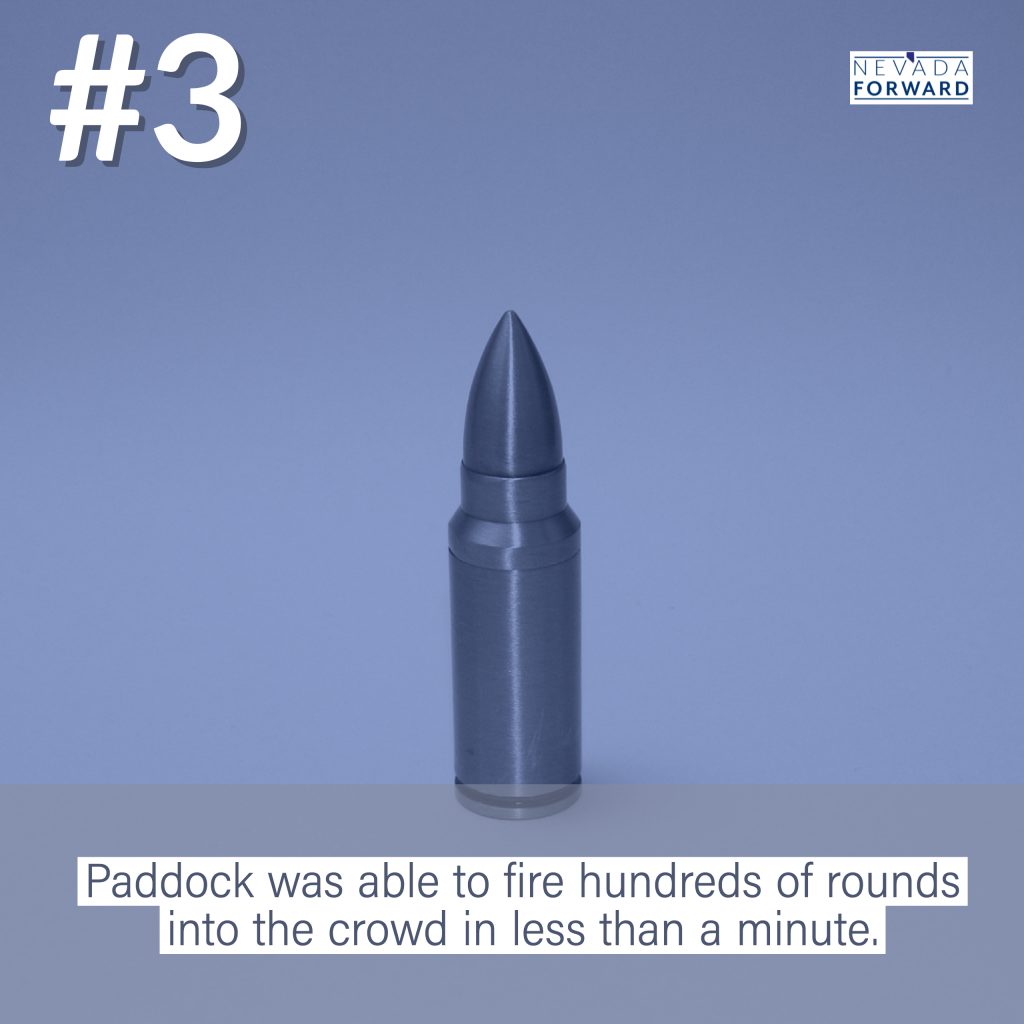 Paddock was able to fire hundreds of rounds into the crowd in less than a minute. 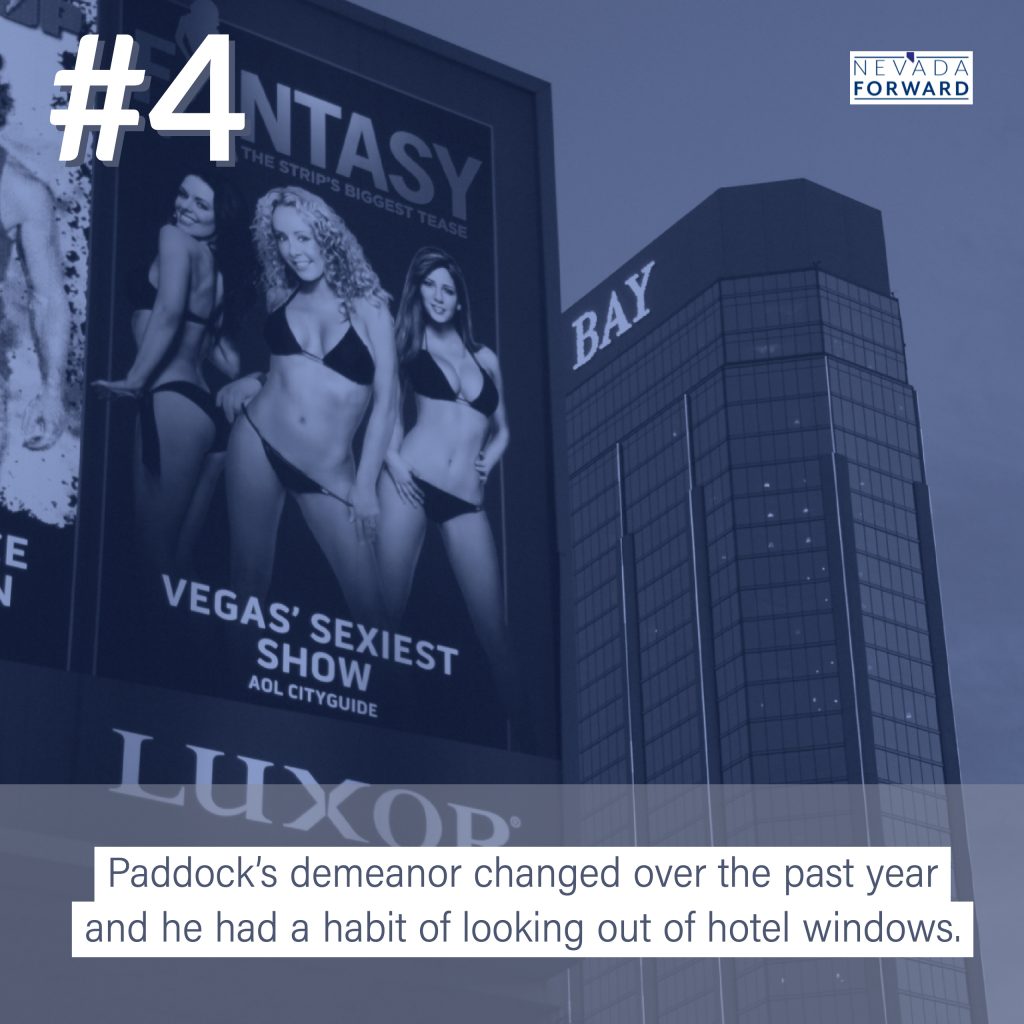 “Danley stated Paddock’s demeanor changed over the course of the last year. According to her, Paddock had become “distant” and their relationship was no longer intimate. Paddock was described as “germaphobic” and had strong reactions to smells. Over the course of the last year Paddock began to buy firearms and Danley believed it was a hobby of his. During a stay at the Mandalay Bay in the beginning of September 2017, Danley recalled Paddock behaving strangely. The two were staying in room 60-235 and she observed Paddock constantly looking out the windows of the room which overlooked the Las Vegas Village venue. Paddock would move from window to window looking at the site from different angles.”
LVMPD report pg 23 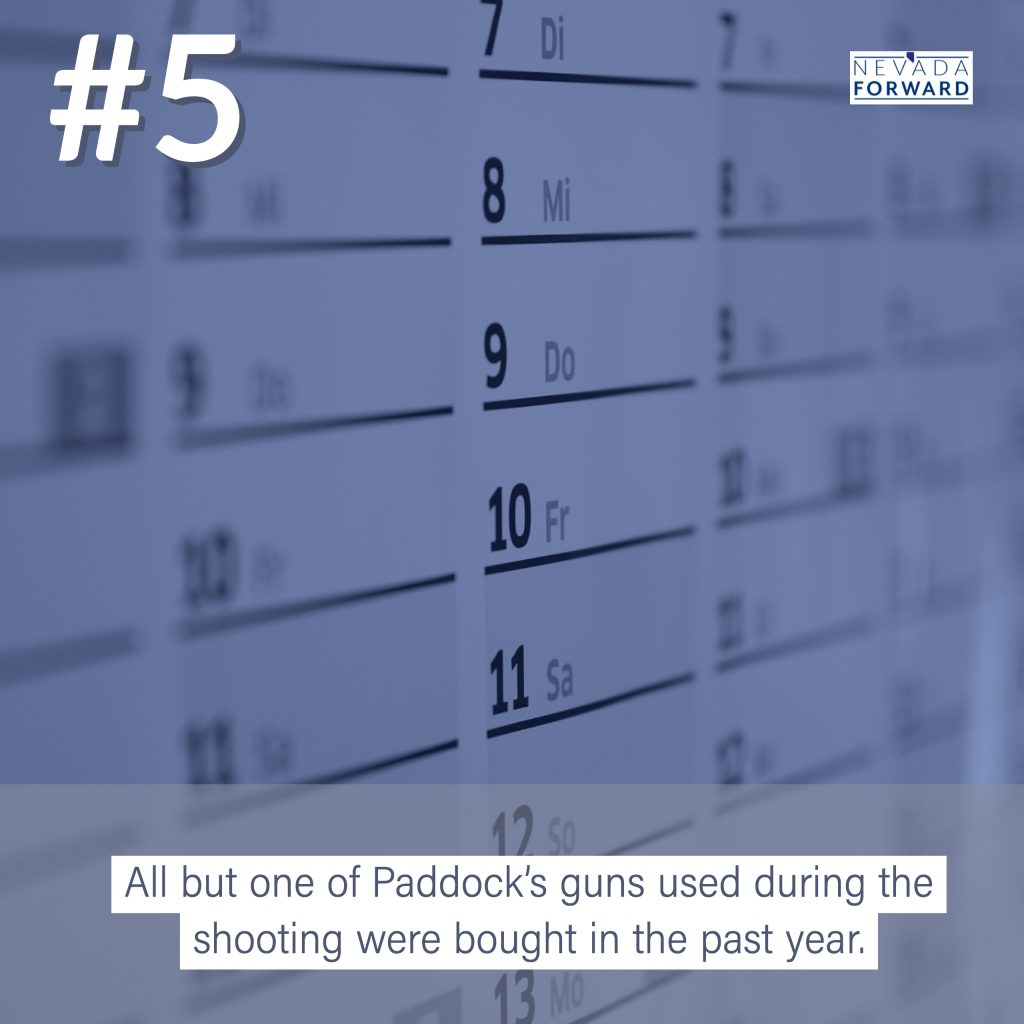 With 1 exception, all of Paddock’s guns used during the shooting were bought in the past year

“From October 2016 through September 2017, Paddock purchased over 55 firearms along with firearm related accessories. Most of the firearms were rifles of various calibers. With the exception of the revolver, every firearm recovered in the Mandalay Bay was bought after September 2016.”
LVMPD report pg 24 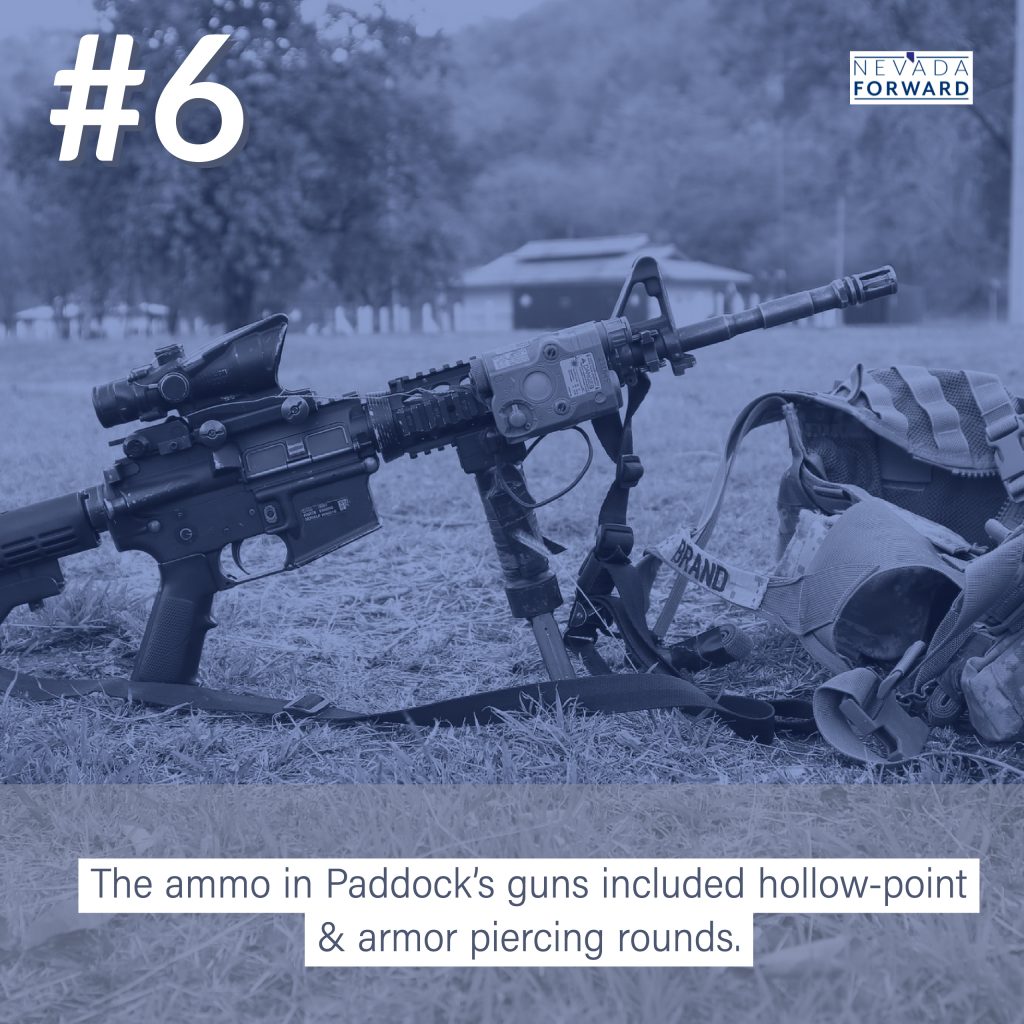 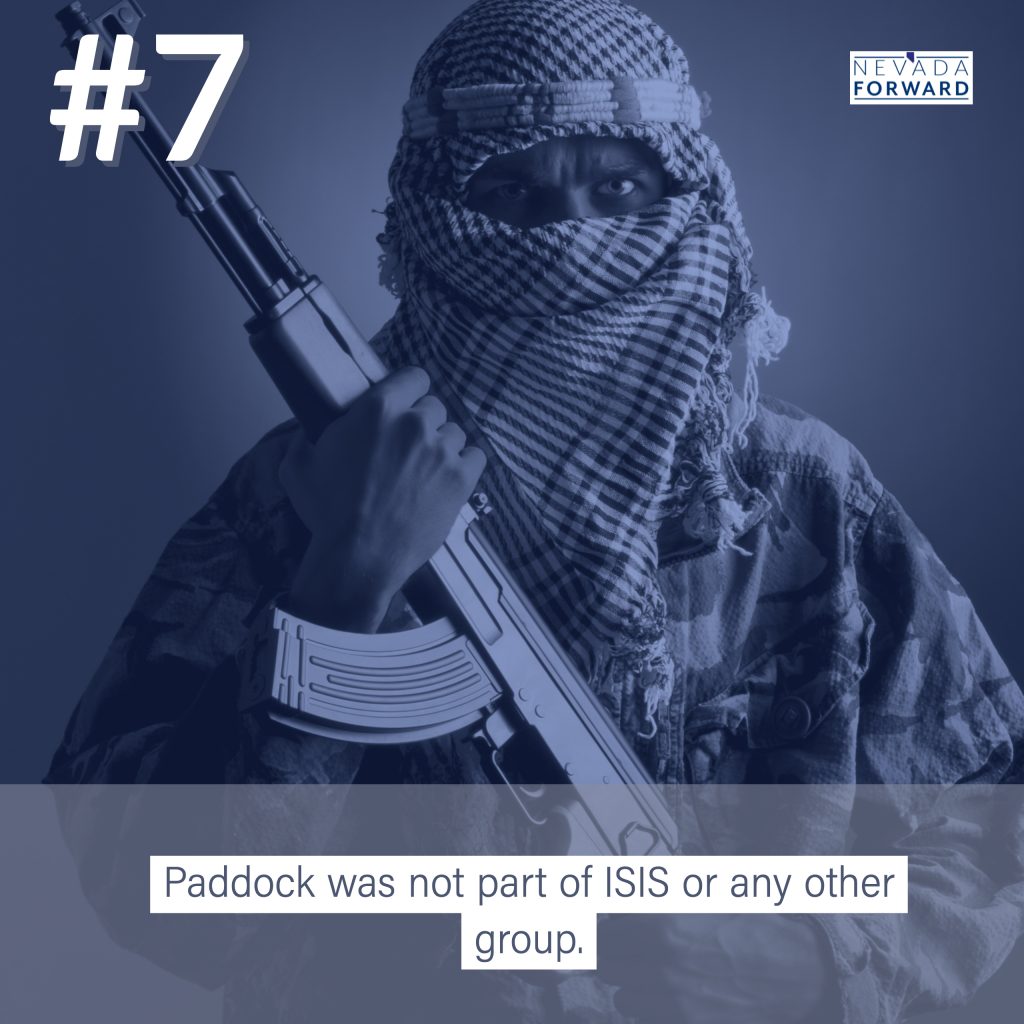 Paddock was not part of ISIS or any other group

“There was no evidence of radicalization or ideology to support any theory that Paddock supported or followed any hate groups or any domestic or foreign terrorist organizations. Despite numerous interviews with Paddock’s family, acquaintances and gambling contacts, investigators could not link Paddock to any specific ideology.”
LVMPD report pg 52 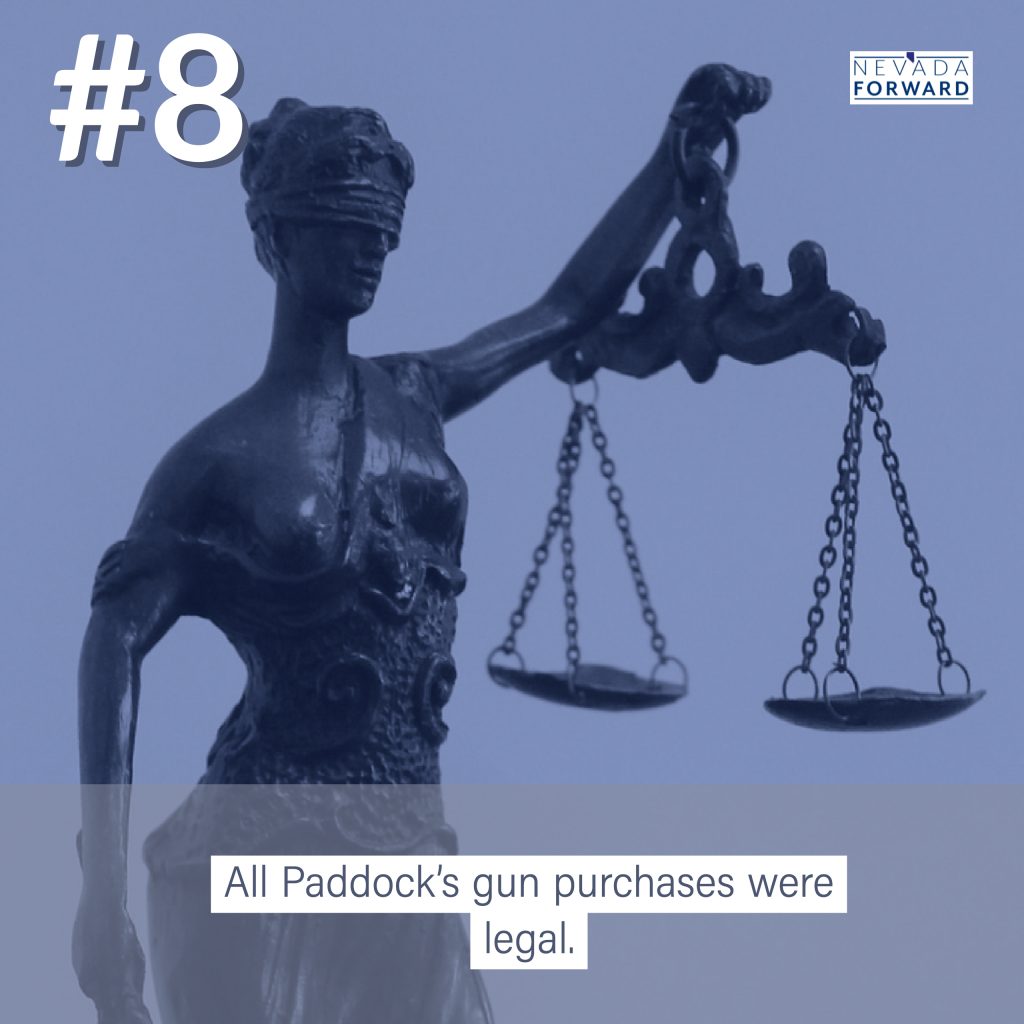 All of Paddock’s gun purchases were legal

“Paddock committed no crimes leading up to the October 1st mass shooting. All the weapons he purchased to include all the ammunition, were purchased legally. This includes all the purchases Paddock made at gun stores as well as online purchases. Paddock did not commit a crime until he fired the first round into the crowd at the Las Vegas Village.”
LVMPD report pg 52 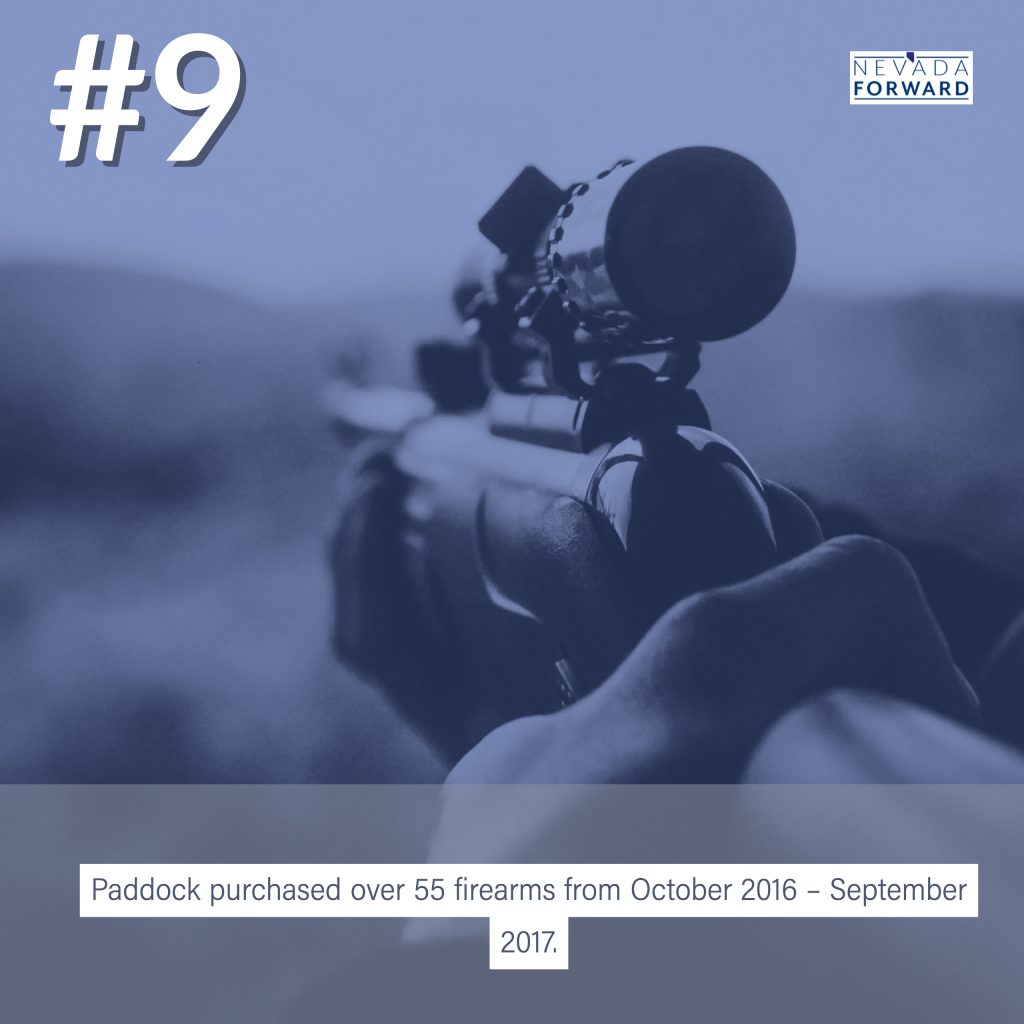 Paddock purchased over 55 firearms in a year

Paddock purchased over 55 firearms, which were mostly rifles in various calibers, from October 2016 – September 2017. He also bought over 100 firearm related items through various retailers during that period.
LVMPD report pg 53 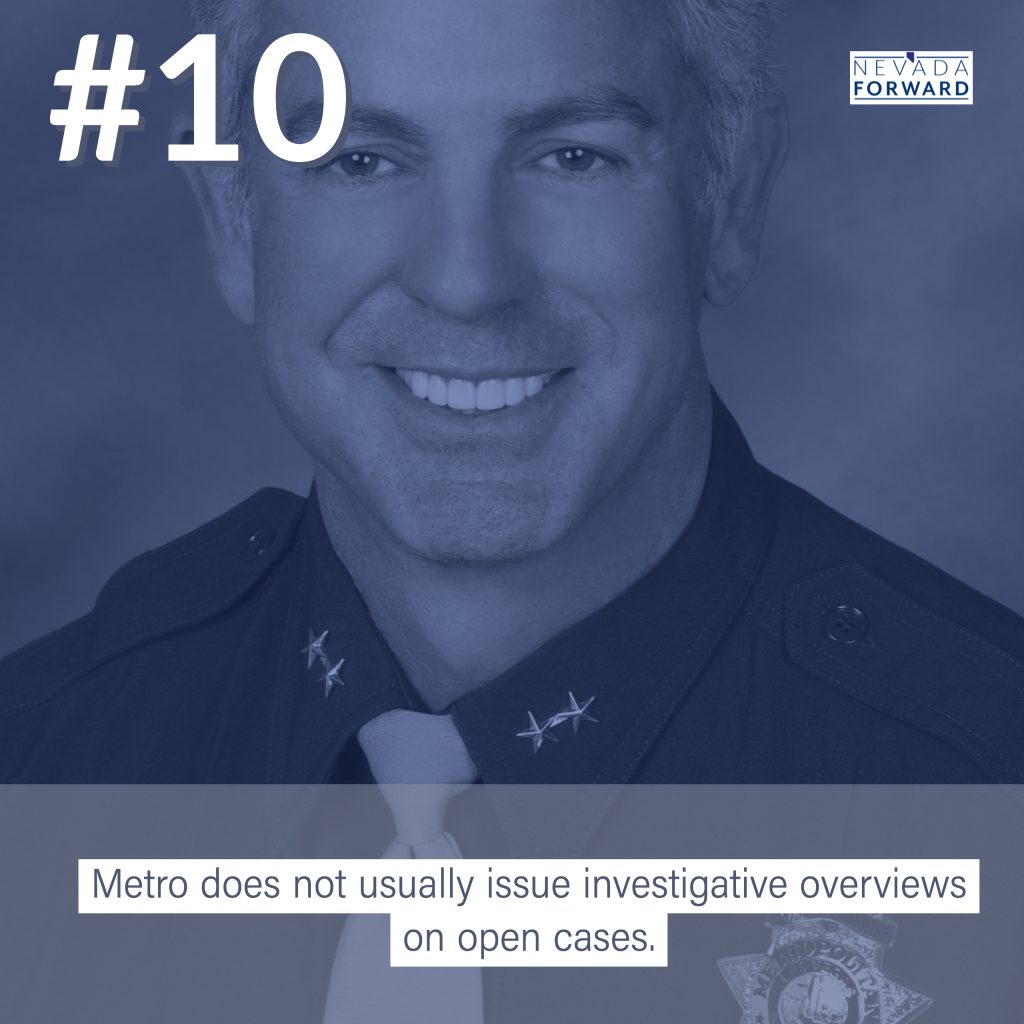 The report itself is not standard practice

It is not standard practice for the Las Vegas Metropolitan Police Department (LVMPD) to issue an investigative overview related to an open case. Due to the magnitude of this investigative response and the number of victims associated with this incident, Sheriff Joseph Lombardo felt it was important to author an overview of all investigative work accomplished in the aftermath of 1 October.
LVMPD report pg 3