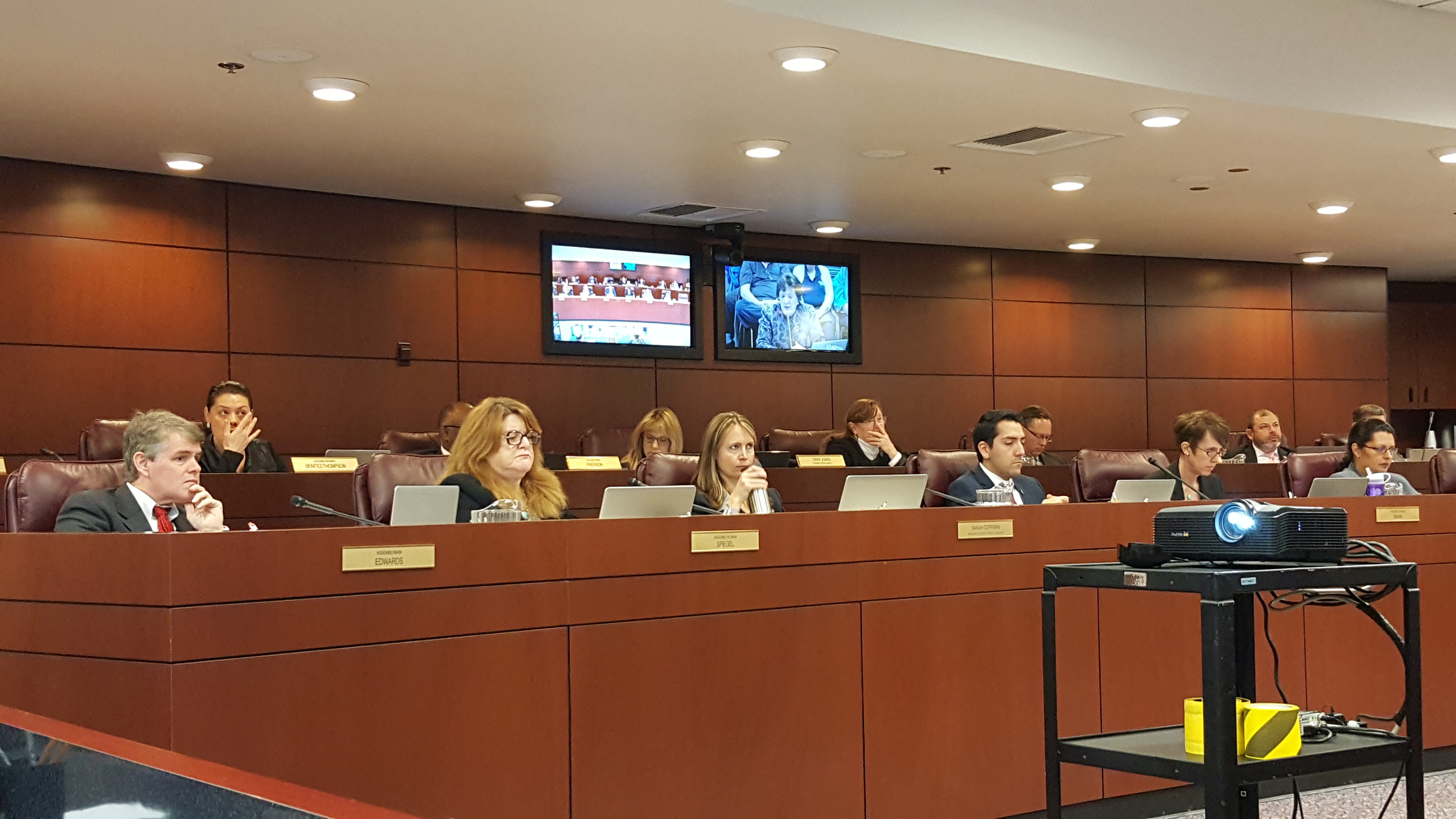 Treasurer Dan Schwartz (R) came to Assembly Ways and Means to discuss his office. Normally, this is a sleepy affair in the Nevada Legislature. However, this Treasurer is pursuing implementation of the controversial education savings account (ESA) school voucher program. This was anything but a sleepy hearing.

“Put this money in the classroom. This $60 million for vouchers could go a very long way.” – Tom Wellman, retired teacher in North Las Vegas

Assembly Ways and Means kicked off with public comment. From the start, citizens arose to condemn the ESA voucher program. A group of retired teachers testified from the Grant Sawyer Building in Las Vegas about how vouchers are designed to divert money from the public schools that are best equipped to serve all students.
Here in Carson City, more citizens testified against ESA vouchers. They spoke of how middle-class and working poor families can’t afford private schools, even with ESA vouchers. ESA data collected in the last two years point to parents in wealthier zip codes (who are already zoned for the top performing public schools) demanding ESA vouchers the most.

“If one student decides to go somewhere else, we fall out of that threshold.” Brian, a single father, NSEA Vice-President, and educator in Zephyr Cove, fears his son will lose access to advanced math and science courses if fellow students use ESA vouchers to leave the local high school. His fears may have been confirmed by the Las Vegas contingent testifying in favor of ESA vouchers. They described Nevada schools as “failing,” even though Governor Brian Sandoval (R) shepherded a budget and tax package last session to provide more funds for public education.
Later in the hearing, NSEA’s Chris Daly unloaded a explosive allegation. Daly brought up a letter, in which the, Henderson International School (a private school seeking ESA money) appears to be in contact with someone from NPRI as they encourage people to use fraudulent information in applying for ESA vouchers.

Ways and Means Chair Maggie Carlton (D-Sunrise Manor) asked Daly to stop when Assemblymember Chris Edwards (R-Sunrise Manor) objected. But from there, the hearing further devolved into a cacophony of frustration. Treasurer Schwartz and his senior staff then took to the testimony table. As has often been the case with Schwartz, he quickly picked fights with various legislators. Carlton even stopped him when he derided Senator Ben Kieckhefer (R-Reno) for questioning his hiring of a Public Information Officer without authorization. She stopped him again when he sparked an argument with Assembly Member Paul Anderson (R-Las Vegas) over his office’s unauthorized expenditures.

“We do decide which people get paid, and how so.” – Assembly Ways and Means Chair Maggie Carlton

Earlier this month, the Senate Finance Committee (the other #NVLeg money committee) scolded Schwartz over his overall handling of his office. Schwartz’s office has been attempting end-runs around the Legislature to not just implement ESA vouchers, but other programs and office staffing.
Assembly Member Teresa Benitez-Thompson (D-Reno) drilled into this further as she directed the conversation back to ESA vouchers. “There was the word of warning that we were investing money that would never be recovered.” Assembly Speaker Jason Frierson (D-Spring Valley) followed up by noting the reason why no one currently has an active ESA.

“There was an injunction.”

Educate Nevada Now’s Amanda Morgan closed the hearing with a simple message for legislators. “The program is dead. SB 302 is dead. The program can not go forward in its current form.” She also told her own story of educating her dyslexic child. When she checked with a Las Vegas private school, that school had a blunt message for her: “‘He may not be a good fit for this school.’ That’s the catch. Private schools get to choose who they enroll.”