Nevada Forward
Home Social Justice Yes, We Still Can? The new reality of the Trump Administration 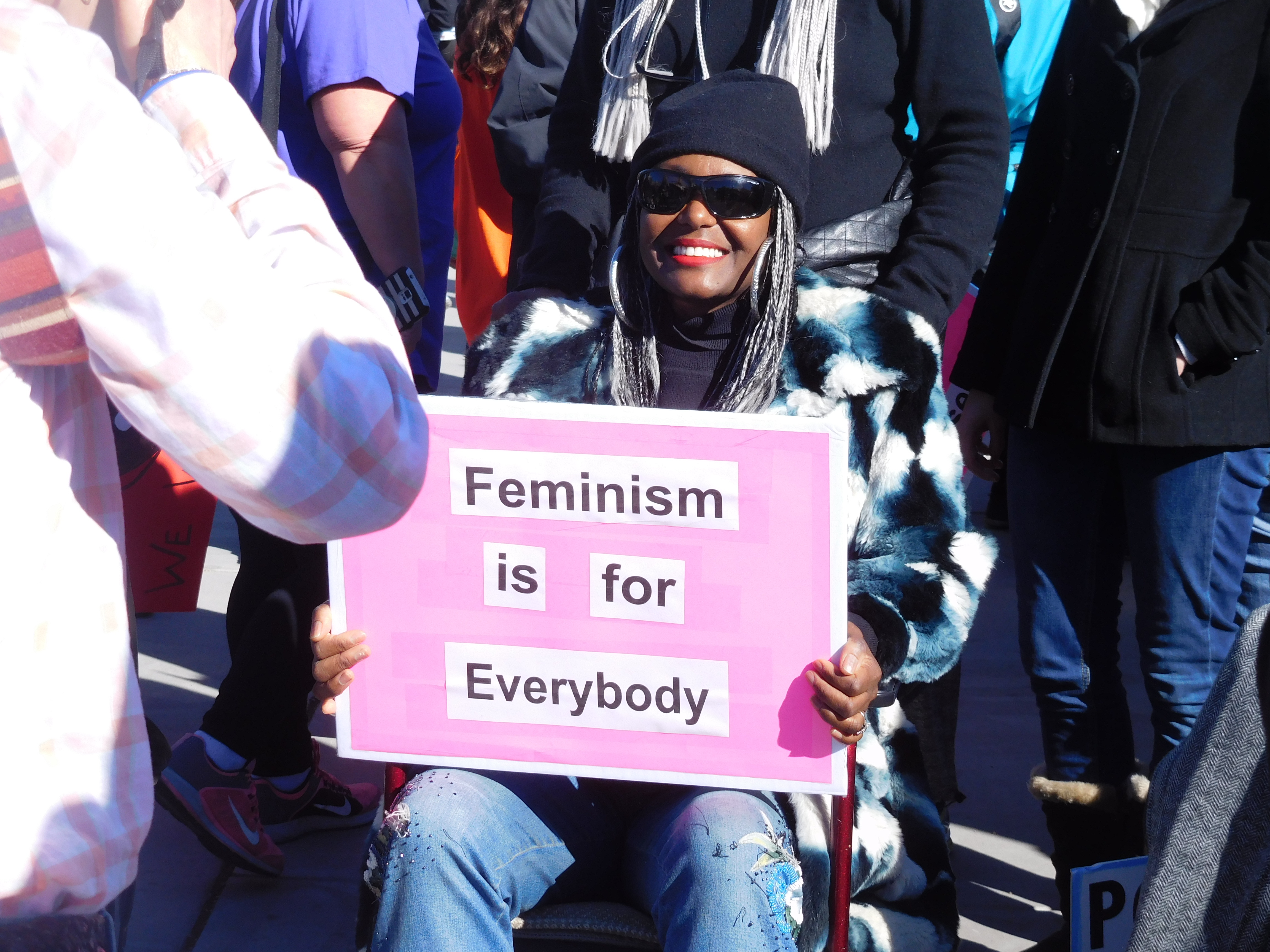 As we conclude Week 2 of the Trump Administration, here’s a look back at how Donald Trump’s Presidency began… And how Nevadans reacted to it.

Yes, it happened. On Friday, January 20th, Donald J. Trump became the 45th President of the United States. The following day, at least 3.2 million Americans marched in protest of the Trump Administration–including at least 20,000 here in Nevada. What was that about? And how will the nation proceed with this new Commander-in-Chief?
Below the fold, we’ll begin adjusting to the new reality of the Trump Administration.Normally the inauguration of a new President is expected to be a time of hope, a time for optimism of what might be. But this time, it felt different. Maybe it has to do with the lingering cloud of Russian hacking? Or maybe it has to do with entire American communities feeling they have no choice but to defend themselves? Maybe it has to do with the inauguration itself becoming a major political battle? Maybe it has to do with Trump’s ongoing problems with 51% of the US population?
“At the center of this movement is a crucial conviction, that a nation exists to serve its citizens. Americans want great schools for their children, safe neighborhoods for their families, and good jobs for themselves. These are just and reasonable demands of righteous people and a righteous public,” President Donald Trump said on Inauguration Day.

Whatever the case, this is different.

Even as the new President called for unity, the very design of his swearing-in felt divisive. Even though Trump promised to unite, the rest of his speech felt as polarizing as ever with mostly the same language he used to succeed in winning a Presidential Election with just under 46% of the popular vote (both in Nevada and nationally).

What does this mean? To whom is President Trump addressing? Where will this wealth go? Whose dreams is he recognizing? And why is the new White House website promoting Melania Trump’s QVC line? As the pomp and circumstance vexed D.C., community activists got down to business in Henderson at an inauguration event hosted by For Nevada’s Future. At Nevada AFL-CIO, attendees were given “Trump-kits” as they learned “tools to defend, plan, & protect for 2017”. With so much at stake, from possible repeal of the Affordable Care Act to potential new attacks on immigrant communities and workers’ rights, For Nevada’s Future organizers laid out a plan of action to “protect progress”.
Attendees and organizers took a few minutes to watch the event, then they shared their instant reactions. There was plenty of sorrow throughout the room, but also renewed resolve to keep hope alive, and the room wasted no time in getting to work. For Nevada’s Future organizers addressed everything from how to effectively protect the most vulnerable from potential hate crimes to where one can fight back the hardest (think #GrabYourWallet). They also provided tips for lobbying federal and state lawmakers, as well as implored upon the audience to #StayWoke for the 2018 Midterm Election, 2020, and beyond. Later that day, I stopped at the Chispa Nevada (the Nevada affiliate of the League of Conservation Voters’ Latinx community organizing program) office east of the Las Vegas Strip for their inauguration themed event. Chispa organizers and other community leaders gathered to make it clear to their fellow Nevadans that regardless of what happens in Washington in the coming days, the resistance is on and progress will continue in the Silver State.
“We need for our [Congressional] delegation to understand Nevadans come first, before partisan politics.” That was Rudy Zamora, Program Director for Chispa Nevada. He and other local progressive leaders who spoke urged Senators Dean Heller (R) and Catherine Cortez Masto (D) to look out for Nevadans instead of blindly toeing any “party line”. Zamora added that the “100 Hours of Resistance” campaign that launched Friday was not some “party line” attack on the Trump Administration, but rather a way for progressive minded citizens to channel their anger and frustration into productive action. Zamora and the other speakers called upon Heller to oppose the most controversial Trump Administration Cabinet picks, such as Secretary of State Designee Rex Tillerson, EPA Administrator Designee Scott Pruitt, and Attorney General Designee Jeff Sessions. They also urged supporters to press Heller and the rest of Nevada’s Members of Congress on the Clean Power Plan, public lands protection, and other environmental issues the Obama Administration took on.
Even though environmental activists at the Chispa event urged resistance at the federal level, they also stressed the renewed possibility for progress at the state and local level. “We have an opportunity right now in Nevada to show the nation what it means to grow our economy by investing in what we care about. That’s where hope lies.” Nevada Conservation League Executive Director Andy Maggi referred to the new leadership of the Nevada Legislature as the 79th Session nears, as well as “moderate Republican” Governor Brian Sandoval seeing “the business interest” in forging ahead to build a cleaner, greener economy.

The call for solidarity and sustained resistance continued to echo when I checked in on the Las Vegas Women’s March on Saturday. People from all walks of life gathered in Downtown Las Vegas to send a message they hope will be understood clearly in DC: #Resist. In contrast to the more somber mood of Friday’s events, the Las Vegas Women’s March had a more ebullient aura. Even as many of the attendees still expressed much of the fear that has gripped communities across Nevada since Trump’s unexpected November 8 triumph, attendees also used their voices, their feet, and in some cases their apparel to demonstrate their commitment to hold accountable their new elected leaders.
At the Las Vegas event, the 10,000+ marchers came from across Southern Nevada… And at least a few drove in from more distant outposts, such as Mesquite and St. George. The march was full of elected officials eager to show solidarity with their constituents, community activists hoping to turn a corner after a difficult election, and many more citizens who view the inauguration of this new President as a wake-up call for them to become more civically involved.
During the march I encountered teachers, students, children, parents, retirees, immigrants, long-time Nevadans, queer folk, communities of color, and even a good number of straight white males.

A few other dignitaries addressed the crowd outside the Lloyd George Federal Courthouse on Las Vegas Blvd., the gathering place for protesters who had completed the march from the Llama Lot on 9th Street. US Representatives Dina Titus (D-Paradise) and Ruben Kihuen (D-Las Vegas) urged this massive collection of people on Las Vegas Blvd to #StayWoke, then prepare to vote in 2018 and 2020. Both expressed frustration over Republican Congressional leadership’s attempts so far this year to run roughshod over Democratic opposition to rush right-wing wish list items, from stripping away health care access to weakening the Violence Against Women Act, to President Trump’s desk. However both also implored upon the crowd to continue standing up and fighting back around the clock.

Time will ultimately tell what kind of lasting impact this march, the DC Women’s March, and other Women’s Marches around the world have. But for the time being, it feels like an incredibly potent statement immediately following the most incredibly awkward beginning to this most incredibly lurid era of American politics. After ten weeks of malaise for many progressives, and even still #NeverTrump conservatives, the first major protest of the Trump Administration seemed to not just overshadow the previous day’s pomp and circumstance, but also rise above the acrimony that now resides in the White House.

When Former President Barack Obama first ran for the White House in 2008, he ran on a pretty simple, yet powerful, theme: “Yes, We Can.” It was a theme that captivated the entire nation, and one that inspired hope in millions of American progressives.
Now it’s a collection of Americans who call themselves “alt-right” who are inspired by President Trump’s theme of #MakeAmericaGreatAgain. But for millions of other Americans, that theme feels more like a veiled threat.
Can America ever heal from this last election and its still turbulent aftermath? Will our democracy ever be the same? Can this nation survive the next four years? These are just a few of the questions Americans are asking each other this week. Perhaps in the coming days, we’ll discover whether any of this past weekend’s events provided answers.