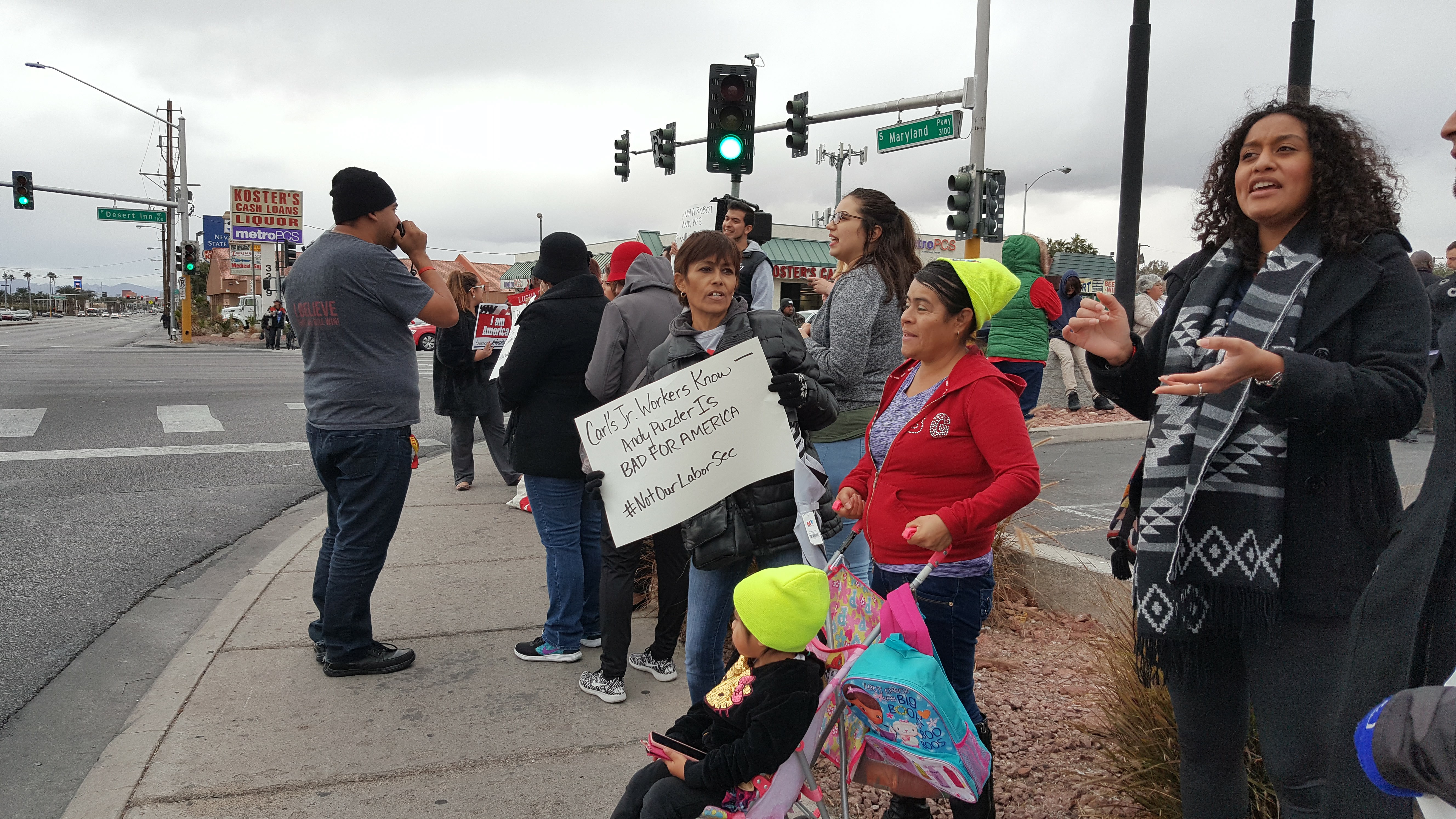 What happened at Carl’s Jr. on Thursday, January 12? Maybe you heard about a Fight for 15 protest at the fast food joint across Maryland Parkway from Boulevard Mall. What went down there?

More importantly, why were protesters there? What was the protest about? And how does it tie into the Presidential Transition? Let’s explore some more below the fold.
Since 2000, Andrew Puzder has served as CEO of CKE Restaurants. CKE happens to be the parent company of Carl’s Jr. Puzder is also President-elect Donald Trump’s pick for Secretary of Labor. And under Puzder’s watch, CKE has an alarming record of mistreating its workers that we’re left to wonder what kind of statement Trump is making by tapping Puzder to take helm of the very federal department that’s tasked with enforcing federal labor laws at his company.
Think about this: CKE has faced serious accusations in recent years, including sexual harassment and illegal denial of breaks. On top of all that, Puzder has repeatedly claimed American workers are “overprotected” with such silly things as workplace safety laws and the minimum wage. And President-elect Trump wants Puzder to oversee the very federal workplace laws he’s denounced?

This could explain why about 40 #FightFor15 activists paid a lunchtime visit to the Carl’s Jr. near Boulevard Mall last Thursday. During the demonstration outside, activists specifically cited Puzder’s CKE record in stating their concern the Department of Labor may take a decidedly anti-worker turn in the Trump Administration.

During the protest, I spoke with Lupe Guzman. She’s a Carl’s Jr. worker in Las Vegas. Earlier this month, she appeared with Senator Elizabeth Warren (D) in Washington, DC. Last Thursday, she was hitting the streets again here in Nevada to ensure elected leaders like Senator Dean Heller (R) could hear them. (I hope you can hear Lupe, as she had just lost her voice when I shot the video last Thursday.)

Shortly after I shot the video, Lupe told me about the arduous process Carl’s Jr. had her and her co-workers endure… For a measly 10-cent raise. And that’s before we factor in CKE’s apparent history of wage theft by way of requiring Guzman and other workers to work off the clock without pay while being denied pay for merely taking lunch breaks they’re legally entitled to.
Now that I’ve had the chance to describe why #FightFor15 activists decided to stage a protest at this Carl’s Jr., we can discuss what occurred when activists went inside.
As I was approaching Boulevard Mall, I could see activists filing into Carl’s Jr. Within minutes, I had made it inside. This is when I witnessed “the incident”. Someone did strike at another person. That someone just may not be the person you thought one was.

As you can see in the video below, the Carl’s Jr. manager on duty raised her hand to knock down an activist’s bullhorn. Management then called Las Vegas Metro Police. Police later cited another activist present inside that Carl’s Jr. before releasing him.

In a sense, this feels emblematic of the overall story of CKE under Andrew Puzder. While he complains about the oppression of regulations, his workers must worry about stolen pay and stolen breaks. As the new administration prepares to take office, how will they fulfill their promises of job creation and renewed greatness?
As CEO of CKE, Andrew Puzder has often signaled his hostility to the very workplace protection laws the US Labor Department is tasked with enforcing. Will he behave differently as President Trump’s Labor Secretary? This is a question being asked far and wide, though it’s also one that resonates when taking stock of the Carl’s Jr. on Maryland Parkway.